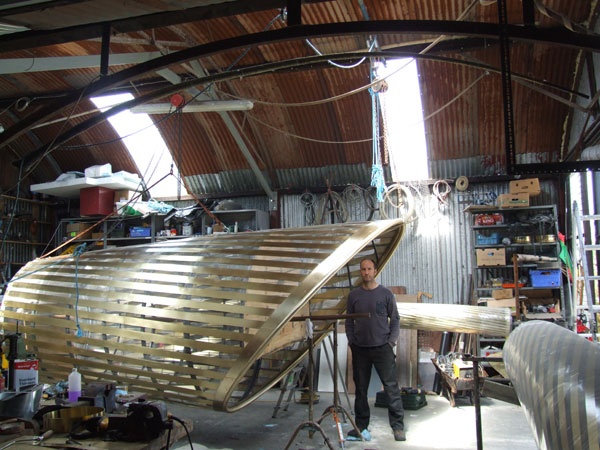 Qualified as a carpenter/Joiner

A graduate of National College of Art and Design, Dublin with a first class honors Degree in Fine art Sculpture (1991)

He exhibits regularly with the R.H.A annual show and with various shows around the country; Most recently with Perspective 03 at the Ormeau Baths Gallery Belfast; Eigse Carlow; ‘Forty shades of Green’, at The Glucksman Gallery Cork and Common Ground at Grennan Mill for Kilkenny Arts Week.

He has received Various Awards including The Alexandra Weijchert Sculpture Award 1998 and a number of Arts Council Bursaries.

He is currently building new house and studios with his partner, and their two children in The Blackstairs Mountains in County Carlow.

He has recently taken a position as part time lecturer in sculpture and photography in the Honors degree fine art course in IT Carlow.

The Great Book Of Gaelic ‘ Touring’

Work in private collections, at home and abroad including Irish Life – Aer Rianta, Donegal CC, Wicklow CC. The Arts Council and the O.P.W

Graduated from N.C.A.D with a first class honours Degree in Fine Art Sculpture 1991. He has had six solo exhibitions to date, at The Project arts centre, 1994

As a full time professional artist, Public commissions make up the main body of his work, Among these are ‘Quintessometry’ at Waterford regional Hospital. ’First Conundrum’ at Festival square, Edinburgh International Conference Center. ‘Gods Navel’ at Charlotte plc Southampton. ‘Silent Witness’ at Meath county buildings, Ashbourne, ‘Eye witness’ at the N26 Ballina and ‘A fracture of time, Castleblayney bombing Memorial co Monaghan and is currently working on a major commission for the OPW. He has exhibited regularly at the RHA annual exhibition and with various group exhibitions around the country.